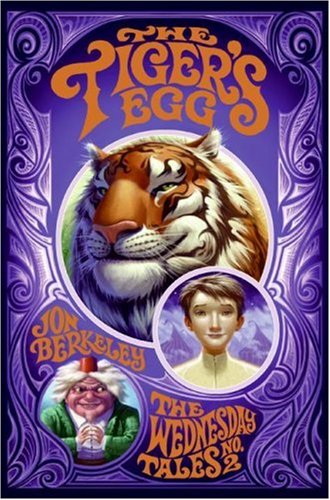 The Tiger’s Egg
by Jon Berkeley

I was delighted to hear from Jon Berkeley after I reviewed the first book of his Wednesday Tales trilogy, The Palace of Laughter. I would have been even more delighted to review the free copy of this second book that he meant to have sent to me. Unfortunately, his publisher never followed through. I ended up getting the book as a gift anyway, so all’s well that ends well.

In The Palace of Laughter we met Miles Wednesday, an orphan devoted to his toy bear Tangerine; an angel-on-earth appropriately named Little; and many members of an evil circus that traveled around, stealing the joy from people’s lives. Since the leader of the Circus Oscuro, the Great Cortado, has been locked up in a mental ward, his old clowns – the three Bolsillo Brothers – have started a new show and taken it on the road. The Bolsillos invite Miles and Little along on their summer tour, employing Little in a high-wire act and to arrange the music for the band (music which releases people from the enchantment the Great Cortado put on them), and employing Miles as a knife thrower’s assistant, pooper scooper, and all-around dogsbody.

Things are going swell until the Great Cortado breaks out of the hospital and begins planning his revenge against the boy who put him there. Also, a less-than-trustworthy circus fortune-teller leads Miles into danger with the promise of helping him learn more about his parents’ fate. Miles learns, almost too late, that Doctor Tau-Tau has betrayed him to a tribe of hairy, cave-dwelling people called the Fir Bolg. Tau-Tau and the Fir Bolg think Miles has a powerful treasure called the Tiger’s Egg – perhaps because Miles occasionally meets and talks with a wild tiger that always turns up just when he is desperate for help.

Escaping the Fir Bolg without having his belly slit open (for they think the Egg is inside Miles) proves to be only the first of many hazardous adventures as Miles fends off attempts on his life, helps recapture the savage Null, begins learning to use powers he hardly understands (powers the well-named Shriveled Fella calls “the bright hands” and “the far eyes”), and prises the truth about his mother and father, morsel by morsel, out of the reluctant craw of the Bolsillo Brothers.

Those Bolsillos! They surely have the gift of comic patter; the Marx Brothers hold nothing over them! But good as their intentions are, they are reluctant to tell Miles the whole truth; so they use their patter to evade his questions. Among Berkeley’s more astonishing achievements in this book is the way Gila, Umor, and Fabio Bolsillo resist Miles’s inquisitiveness, managing to be breathtakingly funny, chillingly grim, and touchingly sad at almost the same time. Many other endearing (or, in some cases, repulsive) characters from the first book are back too, from the by-the-book constable to the police sergeant who yearns in vain for a good night’s sleep; from the blind old sailor whose story-within-a-story is worth the whole book to the crooked Pinchbuckets and their latest dastardly daftness.

The most moving revelation of the book comes near the end, promising an even deeper and more dangerous journey in the final book of the trilogy. I will be looking for it. I may even spend money on it!