Lidi was not easy to ignore, especially when flame shot out of her fingertips. Also, she had an attractive smile.

A book that begins with a pair of sentences like this is off to a strong start. There’s even more to say about it if it comes to an ending as mindblowing and intense as this book does. If, in between a strong start and a powerhouse finish, it is a tight-built, thrilling tale of love and magic and danger and perhaps much more, the trifecta may be downright overwhelming. Though it’s in danger of becoming one of my all-time favorites, I can’t hold back two tiny complaints. First, there’s so little of this book that I came to the end wanting more. My other quibble is simply that the final pages left me wrestling with ambiguity, torn between joy and sorrow. It’s the kind of ending that could keep a book club debating possible interpretations for a month. These are, technically, good things. But good things often give as much pain as pleasure.

Lidi is a young woman living an independent life at a time when such women—especially among commoners—were rare. Her father taught her the trade secrets of a performing magician, then died resenting her for being more talented than he was. His troubling hint that she will never be a true magician until she learns the Rope Trick haunts Lidi, forming as much a part of her outlook on life as the advice of her burly canvasmaster Jericho, telling her to love her audience. And so she has an open heart, giving love without hesitation, first to a ragged orphan named Danielle, then to a farm-boy named Julian who is on the run from the law. But at the same time, she remains restless and dissatisfied, always seeking the legendary magician Ferramondo, who alone can teach her the fabled Rope Trick.

One of the things that is most interesting about Lidi’s quest is how she does not believe in magic, even though her own talent is so strong that it occasionally crosses the line between illusion and something more. In a sense, it is magical how she brings tiny, starveling Danielle out of her shell of imbecilic silence, and goes on to witness Danielle’s strange power to tell the future. But even when Danielle is faking it, her seeming power attracts a danger and an evil that follow in the little troupe’s wake.

Likewise, it is almost magical—and more than almost—how Lidi captures the heart of Julian and turns him from dark path of rebellion and revenge. But when her search for Ferramondo leads them perilously close to where Julian’s troubles began, it seems his destiny won’t so easily turn from him. In the scary and agonizing climax of the tale, the search for Ferramondo, the young man’s quest for justice, and the little girl’s flight from abuse and slavery, converge on one point where the only way out is the Rope Trick.

Award-winning American author Lloyd Alexander here does for medieval Italy what he did for Wales (in the Prydain Chronicles), ancient Greece (in The Arkadians), India (in The Iron Ring), the Arab world (in The First Two Lives of Lukas-Kasha), and probably many other cultures, from the age of myth and legend to modern times. He creates an original story that vibrates with the resonance of a folk tale, and that tickles the tummy, surprises the mind, and warms the heart by turns. I feel a strong urge to devour as many of this man’s books as I can, including the Westmark trilogy, the six-book Vesper Holly series, and such magical stand-alone titles as The Wizard in the Tree and The Fortune-Tellers. 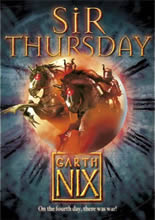