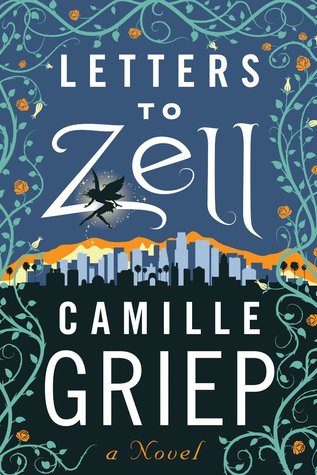 In Letters to Zell by Camille Griep, CeCi, Rory, and Bianca (Cinderella, Sleeping Beauty, and Snow White, respectively) send correspondence to Zell (Rapunzel), who has recently departed Grimmland for Oz. Through their exchanges, we come to see that they are far from the fairy tale princesses we’ve always known and that “Happily Ever After” can oftentimes be anything but.

CeCi desperately wants to become a chef, but her husband and stepmother believe that working in a kitchen is a shameful return to her earlier days as a servant. Rory struggles to keep the attention of her husband, who has a wandering eye, and Bianca just wants to abandon her life altogether and go live Outside in the world of Humans. Can they reconcile their fates – laid down by Figgy, the Fairy Godmother of Time – with their needs and desires? What’s more, can they do it while still remaining friends?

With Once Upon a Time running strong on TV and multiple Disney remakes on the horizon, Letters to Zell is sure to find an eager audience to consume its brand of fairy tale-meets-contemporary women’s fiction. The epistolary format works well for this story, moving it along at a quick pace while allowing the reader to get a glimpse inside the heads of three-fourths of the main characters (we never actually hear anything from Zell herself). At it’s heart, this is a book about friendship, and it’s fun to imagine how these characters – each so famous in their own right – would have gotten along together. Readers who never really grew out of the idea of princes and princesses will likely find Letters to Zell an enjoyable, light read.

Personally, however, I can’t say that Letters to Zell is a book for me. As an avid consumer of fantasy, I found Griep’s worldbuilding unsatisfying, leaving lots of unanswered questions: Why are three anthropomorphic fairy godmothers in charge of things? And why do some princesses receive “Pages” while others do not? It was also unclear exactly where the “Realm” came from and why it depends so much on the imagination of Humans, for which the denizens of the realm seem to have so little knowledge and regard. Beyond that, several of the conflicts were too easily resolved. One or another of the characters would spend ages agonizing over something, only for it to be revealed that there was no point for them to worry in the first place.

I would temper those criticisms by saying, again, that the reasons Letters to Zell didn’t work for me doesn’t mean that a lot of other people won’t enjoy it – I’d just say that this book is less for those who appreciate fairy tale re-tellings in the vein of Patricia A. McKillip and more for those who want Sex in the City with a little bit of charm.

Book Review: “Luck of the Titanic” by Stacey Lee