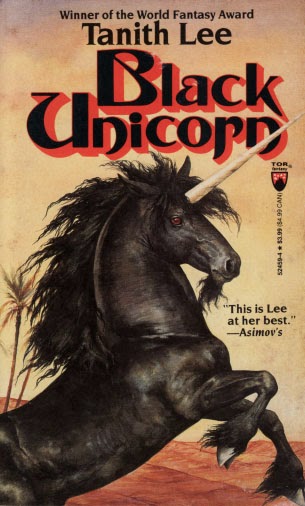 [button color=”black” size=”big” link=”http://affiliates.abebooks.com/c/99844/77798/2029?u=http%3A%2F%2Fwww.abebooks.com%2Fservlet%2FSearchResults%3Fisbn%3D9780689315756″ target=”blank” ]Purchase here[/button] Tanaquil is a red-headed girl from a long line of red-headed sorceresses. But to her mother’s vast disappointment, Tanaquil is no sorceress. Not that Tanaquil is any happier with her lot, cooped up in a castle reeking with unruly magic, with only guards and servants for company, and a desert all around that burns by day and freezes by night. The only thing she has going for her is a talent for fixing things.

One day, a peeve–a sort of burrowing desert creature that, because of an overspill of Tanaquil’s mother’s magic, has learned to speak–brings the lonely girl a very strange bone. Later, the peeve leads Tanaquil to where the rest of a skeleton is buried…the skeleton of a unicorn. Tanaquil puts the bones together and uses her knack for clockwork to make the thing work. By some freak happenstance, the thing of clockwork and bone becomes a real, flesh-and-blood unicorn, with an unintended magical gift from Tanaquil’s mother.

Next thing, Tanaquil is on a strange and exciting journey, escaping from all that she has known, heading for she knows not what. Accompanied by her faithful “pet peeve,” hounded by accusations of witchcraft, persecuted by an artisans’ guild, befriended by a princess, and chosen by a creature from another world to do a thing she never dreamed she could do, Tanaquil’s story goes from terror to suspense to breathtaking beauty to heartbreaking sadness, with wit and irony and warm-hearted humor never far away.

This is a tale of a girl in a badly made world, longing for a better one–glimpsing it, losing it, and deciding to make the most of her own world after all. It is the tale of a frustrated teen staking out her own life, her own dreams. And it is a story of tremendous originality, told in words of unbelievable beauty. This is the first book by Tanith Lee that I’ve read. I hope it will be the first of many.