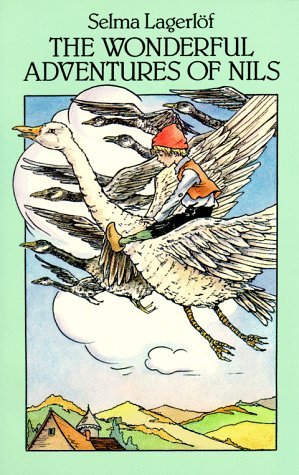 In 1909, Selma Lagerlöf became the first woman to win the Nobel Prize for Literature. Three years earlier, she wrote this delicious book that weaves true lessons of the history, geography, and wildlife of Sweden into folk tale or fairy tale episodes. It is sometimes exciting, suspenseful, and scary. Other times it is witty or silly. And now and then, it is so wistful and even tragic that it will fill your eyes with tears. This book has breathtaking beauty, and a main character whose growh from a selfish twit to a sympathetic hero is heartwarming to behold. The book also has a very helpful guide to pronouncing Swedish names. What the book doesn’t have is a satisfying ending, but be not dismayed. Ms. Lagerlöf also wrote The Further Adventures of Nils, which I am told is more a continuation of this story, than a sequel to it.

The Nils of the title is Nils Holgersson, a lazy, inconsiderate, good-for-nothing boy who has driven his parents to despair. One Sunday morning when his parents have gone to church and left him at home, Nils plays a dirty trick on an elf that lives on the farm. (Elves were supposed to bring good luck to Swedish farms.) The elf retaliates by turning Nils into an elf himself, and condemning him to ride a tame gander who has decided to fly away after a flock of migrating wild geese. Perhaps, if Nils brings his goosey-gander back home safe and sound, he will become human again.

At first, Nils isnt much bothered by his transformation from human to elf. He hardly misses anything about being a farm boy, and gets a big kick out of living the outdoor life and not having to do any work. But soon he begins to learn to put others ahead of himself, as he wins the respect first of the geese, then of other creatures as well.

As the geese fly up the east coast of Sweden, you find yourself learning a great deal about the land, people, and creatures one may find there. So this book could be seen as a textbook on nature and culture and all things Swedish. But if that is so, it must also be seen as the most effective textbook of its kind. For you are drawn into all this new knowledge by the marvelous stories that are woven into it, and the stories seem all the more believable because of the real-life details that fill them, until it is hard to tell where the fiction ends and the non-fiction begins.

Nils, also known as Thumbietot (or Tummetot) in his elf form, comes to the aid of animals in distress. He experiences a vision of a beautiful, lost city. He gets himself a wily enemy by defying Smirre Fox. He encounters death, danger, a storm at sea, an army of rats, a congress of the animals, and abduction by crows. He hears tell of giants throwing rocks into the sea to scare the salmon upstream, and how an island was formed from the fossilized carcass of a giant butterfly. He saves the lives of a flock of sheep, a duck, and a human child, and even plays a role in saving a wild bird refuge. And in the process, he develops a conscience, a heart, and a longing to prove himself worthy of his parents love.

I was moved by this book. Even Robbie Fischer, kids book enthusiast and emotional pushover that he is, doesn’t say this lightly. This is the best book for children that I have read lately, and in order to recommend it fully, I also want to stress that it is NOT hard to read, even though it has some Swedish place-names in it (most of which I could not find on my small world atlas). It is said to be one of a few books that most powerfully represents Sweden in the literary world. But you dont have to know Sweden personally to enjoy it; the words paint such a vivid picture that you will feel you have been there yourself.