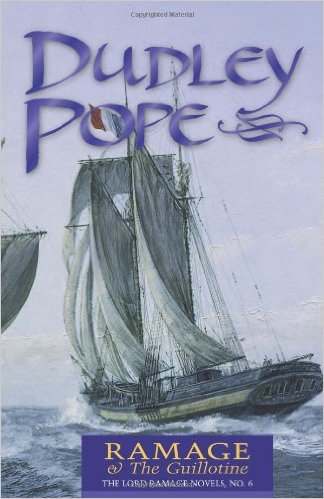 In this sixth book in the Lord Ramage Novels, young Royal Navy Lieutenant Nicholas Ramage accepts a seemingly impossible assignment, personally handed to him by the First Lord of the Admiralty. His mission: to cross the Channel into France, find out the state of readiness of Napoleon’s invasion fleet–which is expected, any day or perhaps never, to attack the English coast–and report back. And although he is a naval hero, he must do all this without a ship of his own. How he gets over to France is his own business; the crucial part of the job must take place on land.

Part of Ramage’s adventure does double duty, both as a display of the young lieutenant’s savvy in finding a way to do the next-to-impossible, and as a historical study of the smuggling trade in the early 1800s. Ferried across the Channel by the unusually cooperative crew of a brandy-smuggling smack, Ramage and a handful of faithful seamen sniff around the harbor of Boulogne. Then, putting his neck at inconceivably high risk of being stretched across the Guillotine, he follows the scent of even better intelligence inland to Amiens. In a paranoid police state where no one can travel without papers, even from one city to another, and where everyone lives in constant fear of denunciation to the powers that be, Ramage risks all on his ability to impersonate an Italian ship-builder, accompanied by a Cockney picklock who doesn’t speak a word of French (let alone Italian) and a French smuggler brazenly impersonating a member of the Committee for Public Safety.

To say that such a mission is “suicide” may lack force in this day and age, where we are accustomed to seeing heroes accomplish the impossible. So in fairness to Ramage’s deathwish, I must mention to you that he spends part of this book–near the end, actually–awaiting execution by guillotine. This brings a relentlessly suspenseful book to a climactic pitch of tension, while also being moving and–believe it or not–bitterly funny…

OFFICIAL: Your execution is arranged for ten o’clock tomorrow morning.

RAMAGE: Thank you. It is a civilized hour. I was afraid you would make it dawn.

I continue to enjoy the exploits of the all but tiresomely admirable Ramage. This is one of his most admirable exploits so far. And it is also a fascinating glimpse into the atmosphere in France at the time of Napoleon’s wars of conquest. I had never really appreciated, until I read this book, the irony that post-revolutionary France was really a miserable, oppressive, horrific place to live. By comparison, the very British Empire against which my country had so recently revolted was, for all its flaws, the best and freest nation in the world, except perhaps America.

It just so happens that I read this book around the same time as a biography of Alexander Hamilton. So I found it easy to agree with some of our founding fathers (such as Hamilton) who sympathized with Britain, and to lose respect for others (such as Jefferson) who worshiped the French Revolution. Imagine that! It could be a novel of naval derring-do that convinces you that “liberty, equality, fraternity,” without the rule of law, is by far the worse tyranny than even Mad King George and his cynical, tax-and-spend Parliament. Maybe all I needed to say was that this is a book that educates as it entertains. But it entertains so well that you don’t mind a bit of educating coming in under the stile!

Book review: “Finnikin of the Rock” by Melina Marchetta