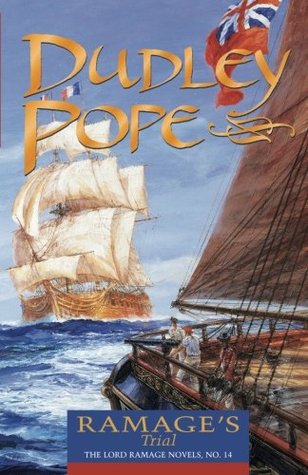 [button color=”black” size=”big” link=”http://affiliates.abebooks.com/c/99844/77798/2029?u=http%3A%2F%2Fwww.abebooks.com%2Fservlet%2FSearchResults%3Fisbn%3D9781590130117″ target=”blank” ]Purchase here[/button]
In Book 14 of the Lord Ramage series, the captain of His Majesty’s Frigate Calypso has just brought a pair of French frigates into Barbados, among the first naval prizes of the new war against Napoleon, when he is dealt the first of a series of shrewd blows. His newlywed wife Sarah has disappeared, together with the brig Murex that was supposed to carry her home from the blockade of Brest. And just when Capt. Nicholas Ramage is on fire to get home, the port admiral puts him in charge of a large merchant convoy.

Convoy duty, as one may have learned from previous novels in this series, can be a fussing, frustrating, slow-moving bore. Even the company of an old friend — well-bred and well-heeled merchant Sidney Yorke — cannot entirely alleviate Ramage’s agony, especially given that Yorke’s beautiful, spirited, and obviously smitten sister Alexis must serve either as a temptation or as a reminder of his beloved wife. And then the British frigate Jason breaks the horizon, and throws everything out of whack.

Jason is commanded by a madman named William Shirley. Shirley cuts a remarkable figure, gliding upon his quarterdeck like a sleepwalker, dressed in a heavy cloak yet, in spite of the tropical climate, not even breaking a sweat. He has some kind of sinister hold over his officers and seamen, preventing them from helping the Calypsos understand why Jason attempted to ram them, then raked them with a broadside, though Shirley now denies that it ever happened. Since the Articles of War make scanty provisionreally, none at allfor removing an unfit captain from command, Ramage risks more than just his career when he involves himself in the mystery of theJason. In fact, as soon as Calypso moors off Plymouth, Ramage is targeted by a court-martial under laws which, if he is convicted, carry a mandatory sentence of death.

The really bad news is that the presiding officer at Ramage’s trial is none other than Rear-Admiral Goddard, a man who has carried a political vendetta against Ramage’s family since Nicholas was a child. Goddard has already done his utmost to destroy Ramage, and now with the authority to dictate the rules of evidence at Ramage’s trial, he really seems to have our protagonist in his power. It is heartbreaking to see the spirit die within Ramage as he faces the virtual inevitability of his conviction, which Goddard has ensured by ruling out of order any defense he can possibly give. But neither Goddard nor Ramage has reckoned on the efficacy of one furious, strong-willed girl, nor on the surprise testimony of the one witness who has nothing to lose.

If you love naval action, or courtroom drama, or stories about virtually insoluble ethical and legal dilemmas, this is book will grip you. It will also inform you about a surprising variety of aspects of 19th century life and the maritime world, bringing that era and way of life all the more vividly before the senses. To be sure, it lacks the subtlety, depth, complexity, beauty of language, and historical realism of Patrick O’Brian’s Aubreyiad, but it is part of a splendid entertainment nevertheless. I could damn it with faint praise and say that I have read many equally good books in this genre; but at the same time, I must candidly admit that I stayed up until 2:00 a.m. before a work-day to finish this book, because after a certain point I just couldn’t put it down. So you can be sure that I’ll be reading Book 15, Ramage’s Challenge, as soon as I can get my hands on it!