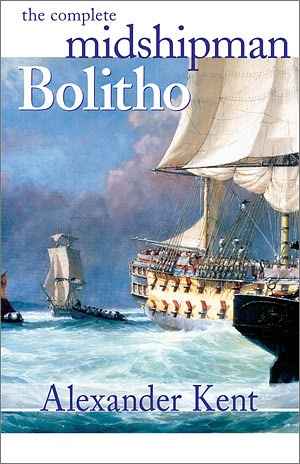 In canon order (that is, the chronology of events within the books), this is the first book in the Alexander Kent/Richard Bolitho series, actually authored by the amazing Douglas Reeman. But it wasn’t the first to be written; that honor goes to To Glory We Steer (first published, 1968). Nor is it really one novel. Rather, it is an omnibus volume of two novellas and a novelette, if I may be allowed to draw such a fine distinction. Published in 1975, 1978, and 2005 respectively, their titles were Richard BolithoMidshipman, Midshipman Bolitho and the ‘Avenger,’ and Band of Brothers.

Even these three books do not cover all of Dick Bolitho’s career as a midshipman in the British Royal Navy, which began some four years farther back at age 12. I suppose, however, that we must satisfy ourselves with what we’ve got. Dick’s career can’t have started to get interesting much before his assignment, in October 1772, to the 74-gun ship-of-the-line Gorgon, commanded by Captain Beves Conway. Just sixteen years old and already on his second ship, Bolitho resolves not to repeat this mistakes of his previous assignment. Instead, he sets out to make new ones, as well as to distinguish himself as a promising future leader. Already well versed in the rudiments of seamanship and the hard routine of duty on a ship of war, Bolitho faces new challenges, makes new friends, and shows every likelihood of living up to the standards of his naval officer brother, father, grandfather, and so on.

None of these things would make this a book that screamed to be picked up and read, without the danger, suspense, excitement, and action that Dick, his friend Martyn Dancer, and their shipmates face in these three short tales. For in these pages they face a band of ruthless, murdering pirates off the African slave coast, and arms smugglers off the Channel Islands. Bolitho serves under the command of his own brother on a revenue cutter, solves a murder, catches a traitor, endures a couple of hostile senior officers, protects a hero-worshiping junior midshipman, passes the examination for lieutenant, and watches his best friend die in his arms. That’s quite a lot for two novellas and a novelette, no?

And there’s just something about the age of sail that makes suspense an equal partner with action in adventure yarns like this. At a certain point leading up to every battle, and even in the heat of battle itself, there are long agonizing moments when all depends on where the wind blows you, at whatever speed it chooses to blow; or on the actions of the men with you, even when the fray becomes so thick that no semblance of order, or ability to give orders, remains. In moments like these, months of hard training and back-breaking discipline can make a lot of difference — while an officer who holds the confidence and loyalty of the men can make even more.

Such moments come, abundantly, in this bookor rather, these books. And though there are a few stretches, particularly in Band of Brothers, where Reeman’s literary style eludes my grasp — where, frankly, I had trouble visualizing what was happening — I felt the promise of Dick Bolitho’s naval career so keenly that I immediately bought the next book in the series: Stand into Danger.