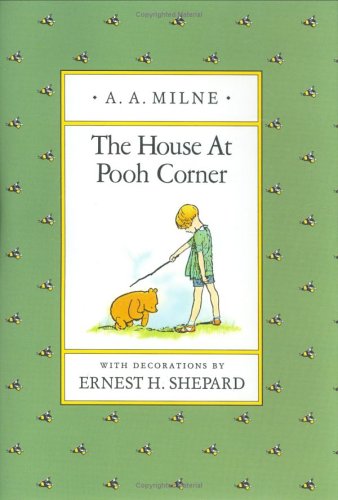 [button color=”black” size=”big” link=”http://affiliates.abebooks.com/c/99844/77798/2029?u=http%3A%2F%2Fwww.abebooks.com%2Fservlet%2FSearchResults%3Fisbn%3D9780140361223″ target=”blank” ]Purchase here[/button]
The House at Pooh Corner is even better than Winnie-the-Pooh. That’s saying a great deal. These books are practically perfect. Lightly, tenderly, they depict a small child’s interior world of play, just at the time when that world starts to be pushed aside for the outer world of letters and numbers and maps and dates. It is a warm, welcoming world where toy animals come alive and have their own personalities and adventures; and where a boy named Christopher Robin – growing up too fast – loves them and is loved by them, and rightly so.

In Winnie-the-Pooh, Christopher Robin was at the age when a child is all questions, sucking raw knowledge out of the world around him. Now, in this wonderful sequel, he is a scholar, having actual lessons… but only in the morning. Thank goodness, this still leaves all afternoon for him to do –oh, nothing – with Pooh Bear, and Piglet, and Rabbit, and the deliciously depressed Eeyore, whose every droll utterance makes me laugh out loud. Plus, there’s a new friend in the forest: a bouncy, not-too-bright bundle of laughs named Tigger.

I regret very deeply that I do not have a son or daughter of my own, because this is a book I would love to read to him or her. Only, I don’t think I could manage the last chapter. Dads shouldn’t be reduced to a blubbering mess by a children’s book, at least in front of their kids. Nevertheless, I would want them to read it, as soon as they were able to do so. For I would like my children to believe, as Christopher Robin does, that the world of every child’s imagination lives on, and remembers, and believes in that child, even after the child has forgotten to believe in it.

Book review: “The Madness Underneath” by Maureen Johnson