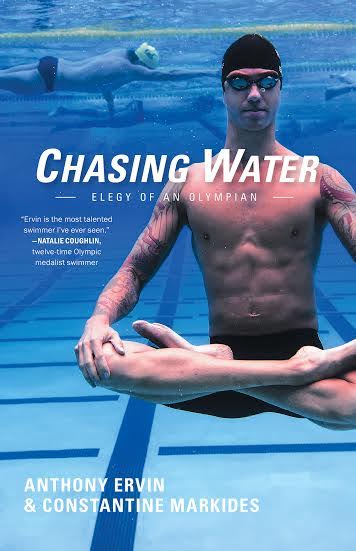 Chasing Water: Elegy of an Olympian is a memoir tracing both the troubles and accomplishments of Olympic swimmer Anthony Ervin, from his breakout performance at the 2000 Sydney Games to his bad-boy image and eventual reappearance at the London Games in 2012.

This is a pretty weird book. Co-written by Ervin’s friend Constantine Markides, whom he met while working as a children’s swim coach in New York City, and interspersed with odd, first-person segments that ostensibly serve to put the reader in Ervin’s head, it never quite finds the appropriate tone. For one thing, even though this book is about Ervin, Markides can’t seem to help himself from inserting his voice and opinions into the text, rather than keeping his presence limited to his interactions with Ervin or even about swimming. Sorry, Mr. Markides – I don’t know who you are. I really don’t care about your opinions on the trials of adolescence, impressive motorcycles, or anything else. It’s distracting, and what’s worse, Markides comes off as a bit of a prick.

Chasing Water also struggles with figuring out what is relevant and/or interesting about Ervin’s life. I don’t care if you’re the Pope or J.K. Rowling – when I’m reading an account of someone’s life, I’m not interested in hearing about your potty training difficulties. Neither Ervin nor Markides seems to have much of an idea of how to edit the full corpus of Ervin’s life down to a narrative about his identity and place in athletics.

In contrast, topics that have almost endless room for exploration, such as the media’s labeling nineteen-year-old Ervin “the first Olympic swimmer of African American descent,” are not discussed in-depth. Ervin’s father is African American, and his mother is white, but as Ervin’s light skin tone always enabled him to pass as white, he had never given much thought to his mixed-race heritage, and hadn’t faced the same challenges as a black swimmer without the ability to pass might have. The label attached to him by the media was understandably disorienting to the young swimmer, and while the book does address how this affected Ervin’s self-perception, it doesn’t at all confront the other side of the coin: how this label might have appeared to the community he was supposedly representing. If not given more space in the text – the book is about his career, after all, not just one aspect of it – it ought to have been handled with more nuance and more research than just Ervin’s memories of how weird it made him feel.

For all its faults, there is one thing this book does well, and that is to give the reader a very good sense of who Ervin is as a person. The first person segments are revealing, almost like diary entries, not only because they give the reader some idea of what was going through Ervin’s head at certain times, but also because they are included in the book at all. Any part of his past that another public figure might try to hide or downplay Ervin confronts honestly and openly, with no shame about sharing with his readers the low points of his life, as well as career highlights. Even the fact that Markides serves as the co-writer for this book, rather than a more seasoned biographer who might have served Ervin’s story better, hones in on a vital aspect of Ervin’s personality: he’s just that loyal.

Ervin is undoubtedly a talented swimmer, and has lived a colorful life, but the writing and structure of this book really just aren’t up to par. If you’re a fan or have any interest in Ervin as a public figure, I think you might enjoy getting to know him a bit better through Chasing Water’s candor. If you’re just a casual fan of swimming or an avid reader of athletic biography, I’d skip it.