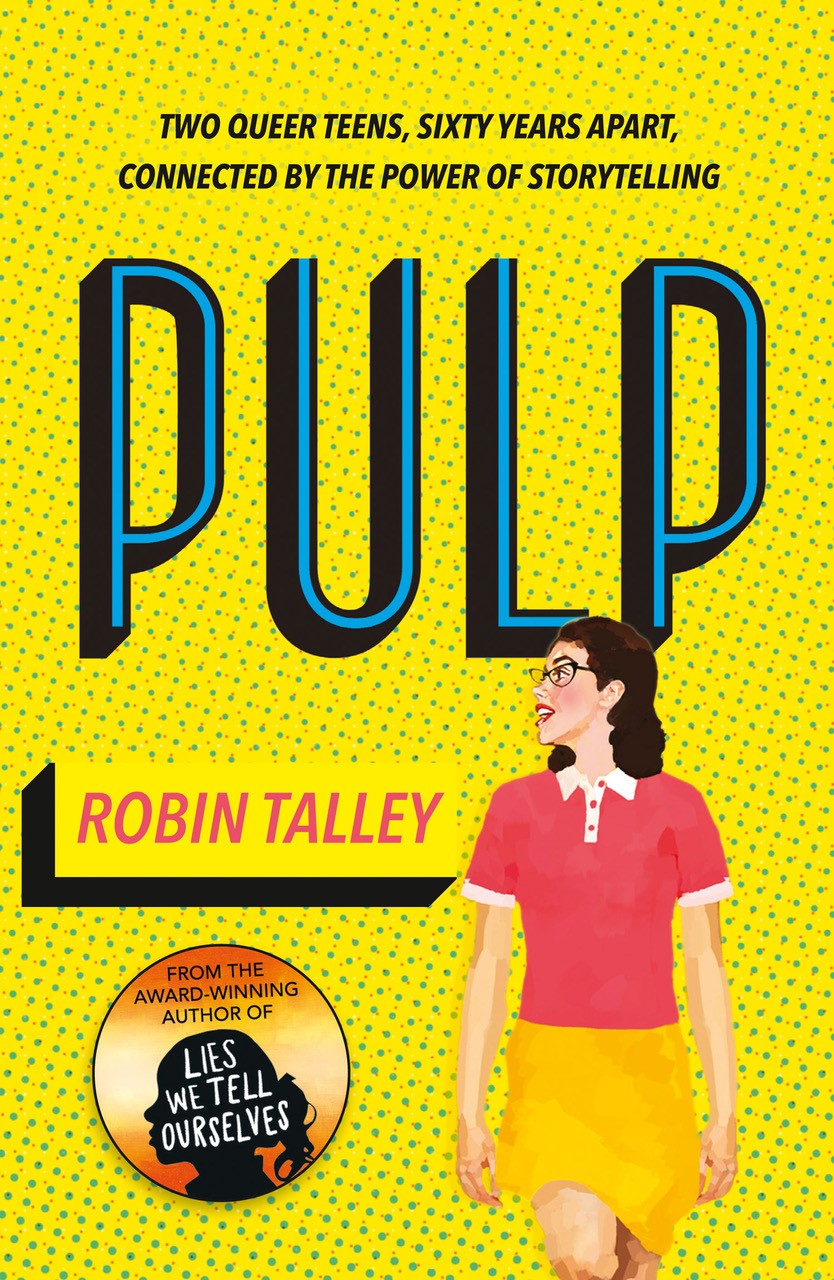 This month’s Author Takeover comes from the multi-award-winning Robin Talley, whose new YA novel, PULP, is just out in the US and soon to be published in the UK. PULP examines how the power of storytelling can connect two young women learning about their sexuality and the world around them across the generations. It reveals how far we’ve come and just how far we still have to go in terms of having truly diverse and inclusive representation in books. With the discussions of queer representation and the importance of giving space to LGBT characters in fiction at the forefront of her mind when writing, Robin was keen to examine Fantastic Beasts: The Crimes of Grindelwald and in particular the pitfalls that have befallen the Potterverse when it comes to making sure LGBT people, young and old, are visible and truly represented in the wizarding world.

In 1955, eighteen-year-old Janet Jones keeps the love she shares with her best friend Marie a secret. It’s not easy being gay in Washington, D.C. in the age of McCarthyism. But when Janet discovers a series of books about women falling in love with other women, it awakens something in her. As she juggles a romance she must keep hidden and a new-found ambition to write and publish her own story, she risks exposing herself – and her friend Marie – to a danger all too real.

Sixty-two years later, Abby Cohen can’t stop thinking about her senior project – classic 1950s lesbian pulp fiction. Between the pages of her favorite book, the stresses of Abby’s own life are lost to the fictional hopes, desires, and tragedies of the characters she’s reading about. She feels especially connected to one author, ‘Marian Love’, and becomes determined to track her down and discover her true identity. But is Abby prepared for what she will find?

Read on for Robin’s review of Fantastic Beasts: The Crimes of Grindelwald.

Dumbledore, Grindelwald, and the Dismal Queer Representation in the Wizarding World

I knew going in, of course, that Crimes of Grindelwald wouldn’t include any direct acknowledgment of the romantic relationship between Grindelwald and Dumbledore. Those headlines in my social media feeds were impossible to miss. It wasn’t much of a surprise, in any case; even over seven very long books that explored Dumbledore’s character extensively, the fact that he was gay never warranted a mention there, either.

Sorry if I sound bitter. It’s only because I am bitter. Here was an opportunity to offer an on-page representation of a gay man who’s also one of the most important characters in the most successful children’s book series of all time, and also the most powerful wizard who’s ever lived.

Dumbledore is the biggest badass in the wizarding world, and he’s gay. It could’ve been groundbreaking if it had actually made it into a book. But no, Deathly Hallows made room for the entire backstory of the Grey Lady, but the fact that Dumbledore was once in love with his eventual nemesis somehow wound up on the cutting room floor.

Look, I’m a queer Harry Potter fan who, like many fans, queer and otherwise, has extremely mixed feelings about the only two canonically queer characters in the entire wizarding world. (Well, technically there’s just one canonically queer character. We haven’t actually been told what Grindelwald’s sexual orientation was, and the degree to which he returned Dumbledore’s feelings is unclear. But for the sake of this conversation, let’s assume both characters fell somewhere under our big rainbow umbrella.)

While it’s great that we now have official confirmation that queer wizards and witches exist, it’s extremely disappointing that they only exist off the page, and now off the screen too. Plus, in the case of Grindelwald, it’s extremely unfortunate that one of the two non-straight characters in this huge, complex fictional universe is evil, and that he used bigotry – his own and others’ – as his primary method for gaining enormous power.

The demonization of queer characters is, of course, a tale as old as time. Dark magic and homosexuality have been associated in the public imagination for centuries, if not millennia.

And the reliance on subtext to indicate the presence of romantic relationships between queer characters is nothing new, either. In the era depicted in Fantastic Beasts and the years that followed, it wasn’t at all uncommon for certain male characters in movies to be portrayed as effeminate, or women to be portrayed as masculine, with audiences being expected to read those characters as queer.

Representation was often more direct in other media, including the pulp novels that were tremendously popular following the post–World War II paperback publishing boom. Cheap lesbian romance novels, displayed prominently at bus stations and newsstands and marketed to men, sold millions of copies during a period in history when being gay was considered so taboo there were public service filmstrips warning kids about the alleged dangers posed by homosexuals.

In this era, for almost everyone, to be gay was to be closeted. I can’t imagine Grindelwald getting away with being an openly gay totalitarian politician in 1927. It stands to reason that the types of supporters he was collecting – that is to say, the coded racist kind – were homophobic, too.

Meanwhile, being an openly gay teacher or school administrator isn’t easy in most places today, and it would’ve been pretty much impossible in 1927. If anyone could’ve managed it, though, it was probably Dumbledore. Being acknowledged as the most powerful wizard in the world, which Albus Dumbledore already seems to be when Crimes of Grindelwald takes place, tends to grant you a lot of leeway. Imagine the strides toward public acceptance that could’ve been made, decades prior to the marriage equality movement, if someone of Dumbledore’s caliber had done a candid interview about his personal life with that era’s Rita Skeeter.

But for all that the Fantastic Beasts historical universe seems to be making an effort to suggest that race is a non-issue in the wizarding world (however implausibly – check out this excellent piece by Kadeen Griffiths on Leta Lestrange’s storyline for more on that), it makes no such effort when it comes to sexuality. If there are any same-sex romantic relationships portrayed in the movie, I didn’t catch them. And, of course, there also aren’t any references to lesbian, gay, bisexual, or transgender characters in the Harry Potter books or in Cursed Child (Albus/Scorpius queerbaiting notwithstanding).

Jude Law made it clear in interviews that he intended to communicate the backstory of Dumbledore and Grindelwald’s relationship through his performance. If you were specifically watching for it, those hints were definitely there, but they were very, very subtle. And based on Derek Riddell’s line readings (he played Torquil Travers, head of the Department of Magical Law Enforcement) during the scene in which he conjured up the flashback slide show of Dumbledore and Grindelwald’s youth, I was pretty sure Torquil knew the truth about their “close as brothers” *wink wink* connection.

But subtext isn’t always a good thing, especially when you’re dealing with a character like Grindelwald. In fact, one of the scenes that struck me most viscerally was the moment when Grindelwald wins Queenie over to his side by making a ludicrous argument about how he wants to allow Muggles and wizards to have the right to marry, using the line “to live openly, and to love freely.”

First of all, Queenie seemed way too smart to fall for such an obvious lie from a man who made no secret about the fact that his fundamental argument was about the subjugation of Muggles. But even more than that, to have a closeted gay villain in 1927 – arguably the greatest villain in the Potterverse, and one of only two known gay characters in the entire wizarding world – use the present-day language of the LGBT civil rights movement to recruit a straight woman to support his coded-racist cause is incredibly upsetting.

Simply making such a profoundly evil character queer in the first place is already conforming to the worst tropes out there about LGBT characters, but it blew me away that the creators of this film, including equal rights advocate J.K. Rowling herself, were having said character explicitly reference his closeted sexuality for the sake of winning over a supposedly fair-minded woman to support his campaign.

When I told my wife about that line, she pointed out that it’s entirely possible that no one involved in the production of this movie made that connection. Which is incredibly depressing, but I think she’s probably right. I’d hope that Rowling, or even friend-to-lots-of-gay-people(-though-still-very-problematic-in-his-own-right) Johnny Depp himself, would have noticed it, but maybe not. It’s a $200 million movie. There’s a lot going on here, and things fall through the cracks.

The other possible reading of that line is that this is further evidence of Grindelwald’s depravity (because the toddler-murder a few scenes earlier wasn’t enough, I guess). That this man is willing to take a belief he presumably holds dear and twist it around into something unrecognizable and cruel. Or, if we go with the interpretation of Grindelwald that holds that he never felt anything romantic toward Dumbledore and was consciously using Albus’s love for him as a tool to manipulate him further (which strikes me as extremely advanced for a 19th-century teenager, but okay), then maybe he was just cynically using that line on Queenie because it had worked for him in the past. Regardless, it’s maddening that this is all so unclear.

It all points to one definite conclusion, though: We badly need more representation of characters from marginalized backgrounds. We need them in big blockbuster movies like this one, for sure, but we need them across the entire media landscape, too. We’ve seen a lot of big strides for LGBT representation in the past few years, from Fun Home to Modern Family to The Favourite, but we’ve still got centuries of erasure to make up for, which means we have an extremely long way to go.

And when the Potterverse can explicitly acknowledge, on the page or on the screen, using actual words instead of meaningful gazes off into the distance, that not every single witch and wizard in the universe is straight and cisgender – well, then we might finally be able to say we’re getting somewhere for sure. About the Author:
Robin Talley grew up in Roanoke, Virginia, writing terrible teen poetry and riding a desegregation bus to the school across town. Robin lives in Washington, D.C., with her wife and daughter, plus an antisocial cat and a goofy hound dog. When Robin’s not writing, she’s often planning communication strategies at organizations fighting for equal rights and social justice. Her first book, Lies We Tell Ourselves, was the winner of the inaugural Amnesty CILIP Honour and short-listed for the CILIP Carnegie Medal. You can find her on the web at www.robintalley.com or @robin_talley.