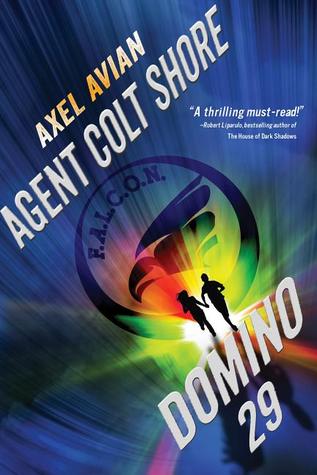 Aimee at Arundel Publishing kindly sent me a pre-release copy of this first book in what promises to be a cool series. I went into this eyes-wide-open, even though I feared it was going to be a rip-off of Anthony Horowitz’s Alex Rider series—both series featuring a type of teenage James Bond. I was also a little wary of it being as unreadably horrible as the last book I accepted from a little-known publisher and a first-time author. You won’t find my review of that book, because I didn’t write one. I only review books I feel that I can positively recommend. So the fact that you are reading this review means that I liked this book. In fact, I really, really liked it.

Colt Shore is like Alex Rider in about the same way that Percy Jackson is like Harry Potter. There are definitely similarities between them and between the organizations they represent; but these similarities could be put down to their common genre. All right, then; so we have established that “a type of teenage James Bond” is now officially a genre. Alex Rider was there first. But Colt Shore is entitled to his turn, and when he takes it, it is most definitely not a ripoff.

For starters, Colt is an all-American kid who goes to a school for secret agents in the all-American town of Springfield, Missouri. For those of you who consider Missouri a flyover state, take it from someone who lives there: Springfield is a real town. The next time I’m down there, I might try to look around for the FALCON training academy, though I hear tell it’s well concealed. FALCON is an elite, international problem-solving organization that combines a think-tank with active agents, answerable to no particular government, policing global crime and serving the interests of world peace. Other than being on a think-tank track, specializing in Mediterranean affairs, Colt Shore seems to be a normal high school kid. At first.

Then Colt finds out who is parents really are. And almost immediately after that life-changing revelation, he finds himself on active status, with a mission to protect a brother-sister teen rock band during a USO tour of Afghanistan. The teens have been targeted for kidnapping since their journalist mother made a connection between a girls’ school in Kandahar and a worldwide human trafficking ring. Suddenly, swiftly, Colt’s mission evolves from protecting Thorne and Talya Ellis to saving the girl, and a dozen others, from a slave auction disguised as a choir tour. Flying out of his comfort zone, and at times riding the edge of becoming a rogue agent, Colt finds himself battling some world-class bad guys amid the scenic mountains and castles of Bavaria.

Click by click, Colt narrates how one decision leads to another, and then another, like the proverbial row of tumbling dominoes, each half-again as big as the last one. You start by tipping over a domino the size of a pack of gum and, in just 29 clicks, you knock over one the size of the Empire State Building. That’s the metaphor that drives this book, maintaining a rising level of tension enlivened by humor, pop-culture references (including references to Bond, James Bond), death-defying stunts, just barely non-lethal action, and a spark of teen romance. It’s the fantasy-fulfilling wild ride of a young man who has trained for a career as an intelligence analyst, and who suddenly finds himself a bit over his head in live-action-hero soup. It’s a sometimes educational look at foreign sites we may not have visited before, even in books; full of convincing details and driven by non-stop momentum. My qualms about this book evaporated soon after the first page, and by the end I was looking forward to the next Agent Colt Shore adventure.