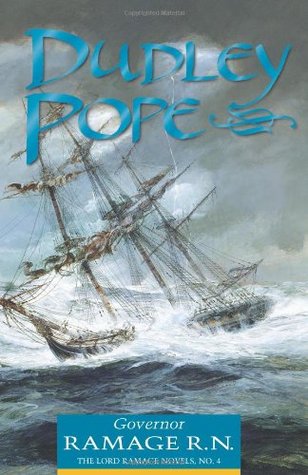 I brought this book to a three-hour-long choir practice one evening. During the break, one of my fellow singers spotted me reading it and asked, “How does a Registered Nurse get to be a governor?” Not that R.N., silly! Can’t you see there’s a ship on the cover? It’s the Royal Navy! The British navy, to be exact, at the time of Horatio Nelson. The “R.N.” part may be a little confusing to Americans, unless they remember the 1951 Gregory Peck movie Captain Horatio Hornblower R.N. The “Governor” part may come as a shock even to those who are following this series, because when we last met British naval officer Nicholas Ramage, he was a very young lieutenant who had never commanded anything bigger than a two-masted brig. How does he now get to be governor of anything? Ah! That’s an interesting story!

A story and a half, even! The fourth Lord Ramage Novel has almost enough naval adventure in it for two Jack Aubrey or Horatio Hornblower novels. Ramage and his crew go through so much that it’s almost unbelievable, looking back, that it all happened in one book. Ironically, it starts with the brig Triton drawing one of the most boring assignments in the British navy: escorting a trade convoy across the Caribbean, from Barbados to Jamaica, along with several frigates and the admiral’s flagship.

At first, the only hint of excitment to come is the fact that the admiral loathes Ramage, for complicated political reasons, and seems just the type to look for any excuse to ruin the lieutenant’s career. But then thrills start flying thick and fast. Ramage finds friendship with a merchant captain and mutual attraction with a pretty young political refugee. A French privateer cons its way into the convoy and attempts to capture an especially precious cargo. An unseasonable hurricane puts Ramage and his men in a kind of danger they have never faced before.

Dismasted, driven by winds and currents into enemy waters, shipwrecked on a hostile shore, Ramage takes charge of the survival of not one but two ships’ companies. He captures a Spanish garrison, finds a Spanish treasure, commandeers a Spanish ship… all that and a court-martial too!

It’s really a lot of fun, and it takes place in a special kind of fantasy world that I hope more kids will discover. It’s a world that once existed, with strange customs and languages, a social structure now alien to us, all confined within a beautiful but terribly small wooden shell afloat on an enormous ocean; a world with titanic battles, exciting chases, complicated maneuvers, and even more complicated politics, each of which can be endlessly fascinating. To a landlubber like me, there is almost a kind of magic to the way men like Ramage harness the wind, command the loyalty of their men, and frustrate the enemy. This particular brand of magic boasts many books and series of books, few of them more satisfying than the Lord Ramage Novels.