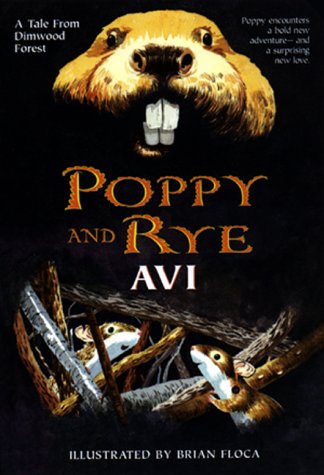 Poppy and Rye
by Avi

This is the sequel to Poppy, and the second of four books in the Tales from Dimwood Forest.

Poppy, our little deermouse heroine, has set out to find the family of her late fiancé Ragweed, so she can tell them how he lived and died. She cajoles her porcupine friend Ereth into going along. Wouldn’t you know it, Poppy meets Ragweed’s brother Rye, and the two fall in love at first sight.

But before anything can come of it, Rye has become a hostage to a beaver “construction company” that has been turning the peaceful brook into a pond filled with beaver condos. These are the same beavers whose pond has driven the golden mice out of their longtime nest, to a dank hole under a bolder in higher ground. In their cheerful, progress-worshiping way, the busy beavers plan on turning the pond into a lake– and now they have their sights set on the boulder. They want to use their little mouse prisoner– Rye– as leverage to get the other mice to move away.

Poppy is determined not to let that happen. She wants to save Rye, and spend the rest of her life with him. She inspires the mice to fight back against the beavers, with a little help from a prickly friend. And in a daring jailbreak plot, Poppy infiltrates the beaver lodge in an attempt to set Rye free.

Will there be more loss and heartbreak? Or will the small and plucky prevail again over the big and greedy? The answer to that, and the question of Poppy and Rye’s future happiness, depends in part on the outcome of a very, er, sticky love triangle. Or maybe a love-hate square, if you count dead mice.

It’s a charming adventure. The beavers make for unusual villains, but they might remind you of certain people we all know. Their cliché-ridden, nasty-nice chatter is irritating, while the mice (and porcupine) stand out as fully-fleshed characters with emotions that move you, trouble you, and delight you. There is a healthy dash of humor, including twisted expressions such as “Wait till you can see the gap between their teeth!”

And once again, I advise against reading the series in the order Harper Trophy arranges them. I recommend the Avon Camelot edition instead. Both contain the same lively illustrations by Brian Floca. Enjoy!