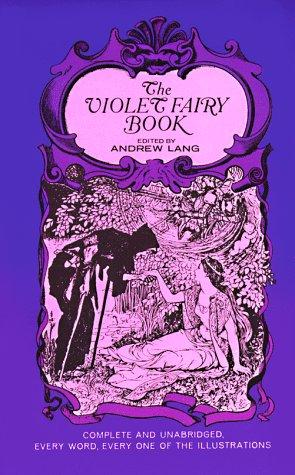 Like the other fairy books edited by Andrew Lang, The Violet Fairy Book is packed with stories (35 of them) from many countries and most continents, stirring illustrations by H. J. Ford, and a captivating collection of magical creatures, brave princes, lovely princesses, plucky peasants, clever rogues, things delightfully familiar, and things surprising and unique. There are more than a months worth of bedtime stories here…if you can hold yourself to one story per night. More likely, you will find it hard to stop at five tales in one sitting. And so…

It opens with A Tale of the Tontlawald, in which an abused child finds refuge in a fairyland where everything is good and sweetbut she cannot stay there forever! Then a sly miller and an innocent boy vie with each other to see who is The Finest Liar in the World. In The Story of Three Wonderful Beggars a rich man tries, in vain, to destroy the peasants child who is fated to own everything he has. A Japanese dog named Schippeitaro helps deliver a maiden from an evil spirit of the forest. And the Lithuanian fairy tale of The Three Princes and Their Beasts has to be a terrific story to outshine the marvelous illustration of a wolf, a fox, a hare, a boar, a bear, and a lion weeping around a princes body. And there, sleepyhead, you must leave off for Monday night.

The Goats Ears of the Emperor Trojan get his barbers into a lot of trouble. The Nine Pea-Hens and the Golden Apples entangle a prince in the affairs of a dragon, a witch, several talking animals, and an enchanted empress. The Lute Player is the first of several heroic women in this book, in this case a queen who dresses as a man to rescue her husband from an enemy kings prison. The Grateful Prince is a tale full of goblins, sorcerers in the form of animals, and magic objects that help a heroic couple escape from a pursuing wizard. And The Child Who Came from the Egg begins as a princess who magically arrives to comfort a childless queen, then is forced to flee from a wicked stepmother and to work her way up from being a servant girl to being a queen. So much for Tuesday!

Stan Bolovan, due to an unwise wish, suddenly becomes the father of a hundred childrenbut this is only the beginning of his adventures, in which he also outwits a dragon! The Two Frogs go sightseeing in a silly Japanese tale about the pitfalls of tourism. The Story of a Gazelle is the sometimes painful account of a faithful animal who goes to great lengths to make his masters fortune. How a Fish Swam in the Air and a Hare in the Water is a secret known only to an old man who needs to teach a lesson to his gossip of a wife. And Two in a Sack come to the aid of an unfortunate man whose wife beats him. And thats Wednesday!

The Envious Neighbor finds nothing but trouble, while he tries to steal the magic that has made the old couple next door so rich. The Fairy of the Dawn is only one of many wondrous creatures a prince meets during his long, perilous quest to find a balm for his fathers failing eyes. The Enchanted Knife enables a young man to accomplish the mighty tasks he needs to do to win a princesss hand in marriage. Jesper who herded the hares is another commoner whose cleverness and kindness help him to marry a princess. And The Underground Workers reveal to a man named Hans where all the wealth in the world comes from. Lights out for Thursday!

The History of Dwarf Long Nose begins with a chilling tale of a child being abducted from a crowded market, and what is perhaps more chilling, how he comes back in a form that his own parents do not recognize. The Nunda, Eater of People is about the hunting of a maneating cat, and other amazing feats of a mighty African prince. The Story of Hassebu is the somewhat sad story of a young healer who unintentionally brings doom to the King of the Snakes. The Maiden with the Wooden Helmet wears her headpiece in order to escape the trouble that is bound to happen if people knew how beautiful she is. And The Monkey and the Jellyfish become involved when a turtle is sent to find a cure for the sea-queens sickness. Alas, so ends Friday!

The Headless Dwarfs are enemies of a clever servant whose master, a minister, has trouble finding anyone to ring the midnight bells. The Young Man Who Would Have His Eyes Opened learns, to his cost, that ignorance is sometimes bliss. The Boys with the Golden Stars are princes who make an astonishing comeback after their stepmother does everything in her power to destroy them. The Frog manages to become not only a bride, but the favorite daughter-in-law of an old woman, before being turned into a real wife by three grateful witches (this story could have been called Laughter Is the Best Medicine). And The Princess Who Was Hidden Underground is finally found, and wooed, by a prince dressed in sheeps clothing. There goes Saturday!

The Girl Who Pretended to be a Boy is one of the gender-bendingest fairy tales ever, in which the impersonation is so successful that the girl actually becomes a boy. The Story of Halfman shows us a half-sized fellow who proves to be twice as much a man as his normal-sized brothers. The Prince Who Wanted to See the World gets tricked, instead, into being an enemy kings slave, but a helpful dove gets him out of his difficulties. Virgilius the Sorcerer casts his spells all over ancient Rome. And finally, Mogarzea and His Son are an adoptive family who work together to foil the wicked elves, so that the father can get his soul back, and that the son can marry a fairy princess.

If you should read all twelve of Andrew Langs Many Colored Fairy Books, you may detect a certain amount of creative repetition between them. But in a way, this works to their advantage. Like a kaleidoscope of familiar elements, sprinkled with the occasional strange and glorious surprise, these stories feel like old friends the first time you read them. And better yet, you learn that the secret in telling a good fairy story lies not in repeating it word for word, or reading it out of a book, but in knowing the pieces of a great story and putting them together as you like. But if you cant tell a good fairy tale off the top of your head, even after reading all these books, at least you will have many, many favorites to return to again and again.