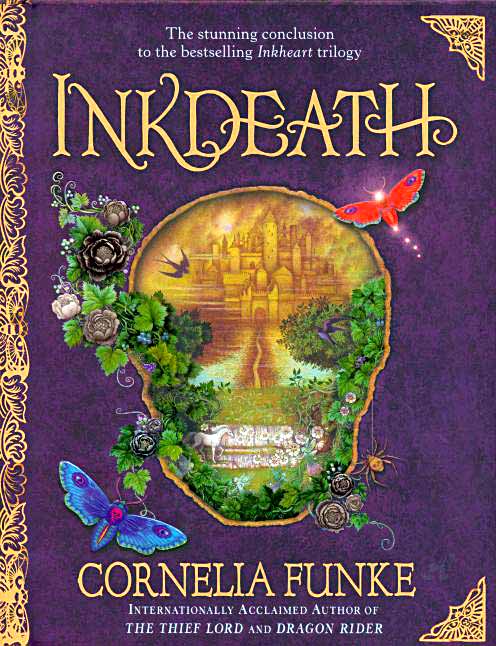 In the concluding book of the Inkheart trilogy, a blended cast of real-world and fairy-tale characters, brought together by a combination of an author’s magical words and a reader’s magical voice (well, three or four readers’, actually), face the crisis that will determine whether the Inkworld lives happily ever after or descends into everlasting darkness and horror.

When we last left Meggie, Mo, and all the rest, the situation was troubling enough. Dustfinger, the fire dancer who is really the heart and soul of the world Fenoglio wrote into existence, has made a bargain with death, trading himself for his young apprentice Farid, a refugee from the Arabian Nights who also happens to be Meggie’s first sweetheart. But now that Farid is back, things are different. He seems to care more about getting Dustfinger back than anything, including Meggie. Dustfinger’s wife and daughter haven’t recovered from their grief.

But there is a bigger problem now. Fenoglio’s attempt to rub out the evil Adderhead, also known as the Silver Prince, has misfired. The book Mo bound for the Adderhead, supposedly to make him immortal but really meant to destroy him as the book itself deteriorated, has not done the job. The Adderhead has discovered a way to arrest the book’s decay by soaking its pages in fairy blood. This is gross enough, but with the Adderhead’s body arrested at a comparable stage of decay and his temper nastier than ever, things start to get really unpleasant in the Inkworld.

The silver-nosed Piper threatens to round up the children of Ombra and work them to death in the Adderhead’s silver mines. Orpheus, a selfish man-child who combines a lesser form of Fenoglio’s writing powers with a mild version of Mo’s silver-tongued ability to read people out of books and into reality, is starting to rewrite reality to suit his personal ambitions. The witch Mortola, who can transform into a magpie, still wants revenge on Mo for the death of her villainous son Capricorn, and she isn’t above dropping poisonous words and berries where they can do the most harm. The Adderhead’s daughter, pushed off her late husband’s throne in favor of her father’s milksop brother-in-law, wants to enlist Mo’s aid in killing the old man so she can be queen. And thanks to the power of Fenoglio’s words in a series of ballads celebrating the deeds of a heroic robber that he modeled on the real-life Mo, Violante isn’t the only one who thinks Mo is the Bluejay. The role is starting to play the man. Meggie and her mother Resa aren’t sure what scares them more: the chance that Mo will perish trying to do what Violante expects of him or that he might lose himself as the Bluejay continues to take over.

Having said this, I have only just set the stage for a complex, suspenseful, exciting adventure full of magic and danger and good people doing their best against seemingly unstoppable evil. It has glass men and giants and brownies and torturers and rainbow-colored fairies and a tame bear and a man whose words have the power to shape the world, especially when read aloud by certain people. Unfortunately, that man has writer’s block, and an evil plagiarist has found out how to use his words to bend the story in a different direction. It has two men returned from the dead on a mission to kill an immortal monster, but under the terms of their bargain with death, if they fail not only will they die again, but Meggie will die, too. It has a book that will keep its owner alive forever, albeit in hideous torment, unless three particular words are written in it. It has a pregnant woman who learns to change shapes and a situation so fraught with danger that she risks it, even though she does not know how it will affect her unborn child. And it has a climax in which everything depends on the least trustworthy character in the Inkworld and in which, as I listened to Alan Corduner’s audiobook narration at the wheel of my car, I found myself pounding the steering wheel and screaming, “Write it! Write it!”

Originally titled Tintentod, this book was translated from German by Anthea Bell. Funke is also the author of the MirrorWorld books Reckless and Fearless, a quartet of juvenile ghosthunters books, and several stand-alone novels for kids, including the recent titles Young Werewolf and Emma and the Blue Genie.

Book Review: “Sia Martinez and the Moonlit Beginning of Everything” by Raquel Vasquez Gilliland