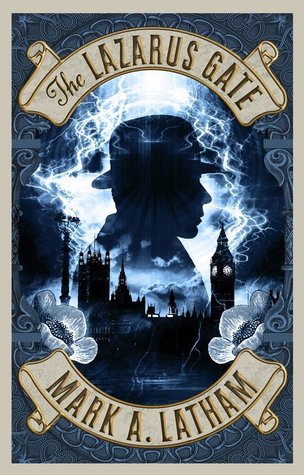 Mark A. Latham’s latest novel, The Lazarus Gate, engulfs the reader in a provocative story that encompasses the themes of survival, mystery, and other alternate realities. When Captain John Hardwick is released from his imprisonment in Burma he’s filled with many emotions. He’s thankful that his opium torture is over, but also a bit anxious to return to the Queen’s land in England, which he now considers foreign territory. Upon his arrival back in London he’s recruited for a secret order called the Apollo Lycea, who protect the Empire with agents throughout the country and close to the Queen.

Adjusting slightly to what Hardwick considers his former life, he’s then given a mission by Apollo’s leader, Sir Toby. Hesitant at first, Captain Hardwick accepts the mission that will forever change his life.

Set in the 1800s in England, forces that are considered paranormal start abruptly popping up in the form of “bombs”. This catches the eye of the Apollo Lycea as a far more perilous action than a simple terrorist attack. Investigating the mission and paranormal activities, Hardwick learns that not everyone can be trusted, especially the people closest to him. With an invasion of people called the Othersiders, not everything is as what meets the eye.

The author, Mark A. Latham, is known for his fondness of history and brings it to life in The Lazarus Gate. Using dialogue and descriptions to his advantage, Latham is able to project vivid images of alleyways in London and the common tongue that would be heard.

I highly recommend this book to anyone who enjoys a thrilling mystery set in a time period of discovery. According to Goodreads, it’s presumed that this is the first book in an upcoming series.

Recommended reading age: 15+ due to fighting and torture descriptions.