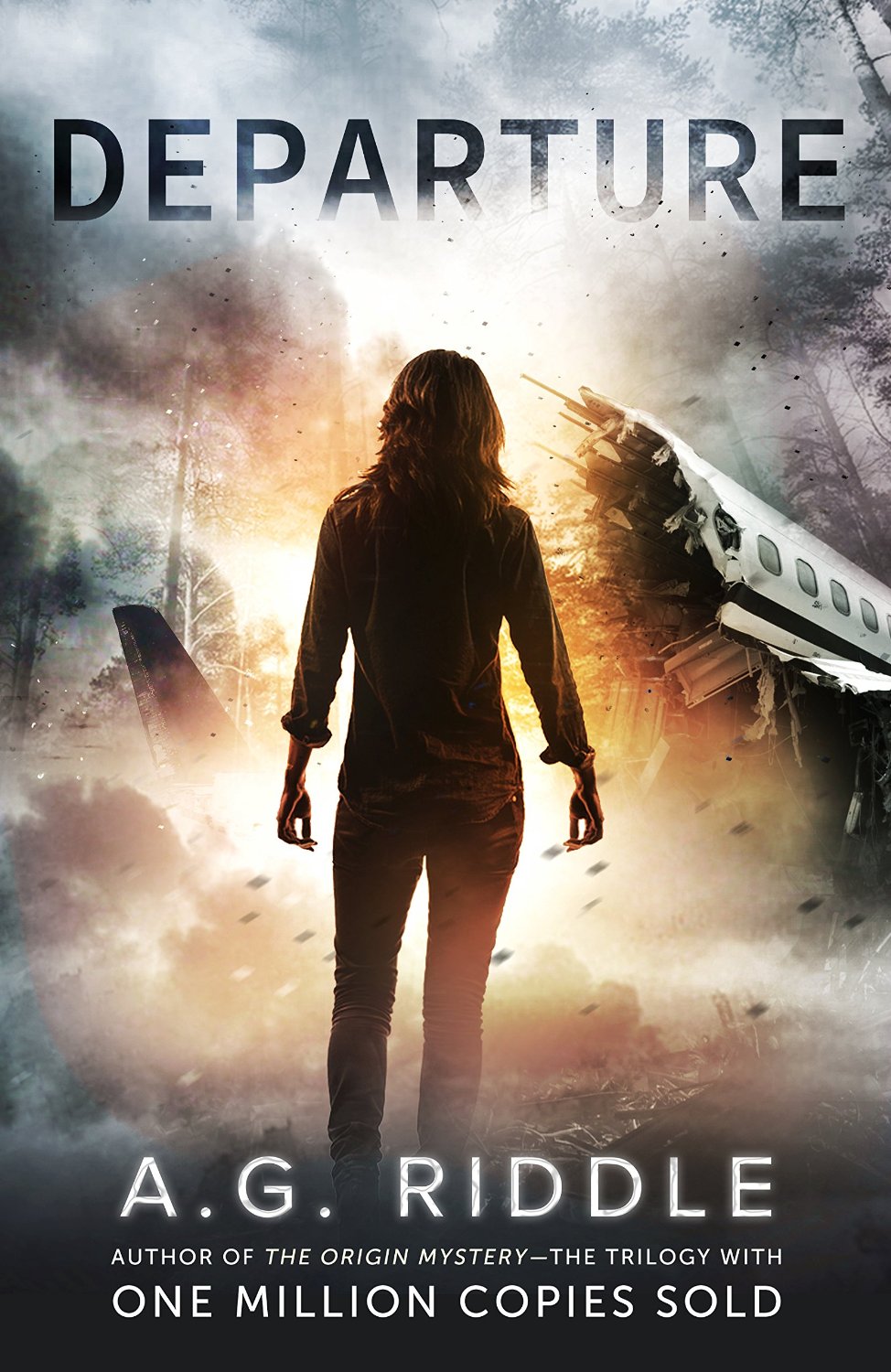 Departure is a story about decisions. Sure, it’s a scientific adventure involving time travel and dystopia, but underneath those layers of techno-babble lies a story of hard decisions and human nature.

I wonder what the world would be like if we could all glimpse our future before every major decision. Maybe that’s what stories are for: so we can learn from people living similar lives, with similar troubles.

The book follows Harper Lane, a biographer who is too afraid to follow her dream, and Nick Stone, an investor/venture capitalist who is oddly comfortable taking charge as flight 305 – which carries both of these protagonists – crash-lands into an English countryside. The book alternates between POVs of Harper and Nick, who develop a palpable chemistry early on in the novel.

I liked Harper as a protagonist. Even when she was weak, she didn’t come off as a damsel in distress. Although, I was disappointed that her only relevant link to the plot, her reason for being on the plane, was her potential relationship with Nick/Nicholas. Whereas other characters – the stoic doctor Sabrina Schröder, the tech genius Yul Tan, and even Nick himself – were involved because of their innovations and brilliance.

Speaking of Nick, he is a character I’m still not certain how I feel about. Firstly, in the earlier chapters, when he wouldn’t reveal to Harper (or the listener) his occupation, based on his demeanor during the crash, one would assume he was some kind of crisis professional – a military officer, or something along those lines. When we discover that he’s a venture capitalist, it’s almost disappointing. I suppose the suspense existed to further the plot and conceal his involvement in the Titan Foundation until the big reveal. Secondly, his friendship with Oliver Shaw, who I did not warm up to, is also something I see as a reflection of his character. Oliver Shaw is a capitalist who, in 2147, is perfectly content blowing up what Titans remain from the foundation he built, once he has what he wants. I do not condemn his character completely, but would have loved some exploring of the grays in both his and Nick Stone’s characters.

Had this been a series or a trilogy, it perhaps would have given the author the room to flesh these characters out some more. But Departure is not part of a series, it’s a standalone novel – action-packed and fast-paced.

It seems I’m involved in a conspiracy that spans space and time and a conflict whose outcome will determine humanity’s fate in two separate universes.

In all honesty, I don’t think I would have breezed through a print version of this book, as I did the audiobook. Narrated by Nicola Barber and Scott Aiello, who truly bring the characters of Harper and Nick to life, the scientific aspects of the book – tackling quantum physics and whatnot – seemed easier to listen to than they would have been to read through, personally.

Another reason why I would recommend listening to this book, rather than reading it, would be because of the method of storytelling. There are many instances where details crucial to the plot are being told to or read by the protagonist. A story is being told to the character within the story, which not only makes these key happenings seem anti-climactic, but also these long descriptions and events arduous.

The plot, though confusing at times, was entertaining and exhilarating. The only aspect it falters in, if I were to nitpick, is when it tries to be something it’s not. Despite all the scientific talk about time travel, this is book is an action flick with blends of sci-fi and romance, and that’s okay. However, it tries to be something deeper and fails. And often it even seems like many of the physics terms thrown around are gratuitous.

The author is very comfortable writing scenes with movement and action, which are crisp and effortless to read/listen to. The last seven or so chapters of the book, however, where the characters return to 2015, seem to drag on. It seemed like the events in these chapters could have been wrapped up in less than three or four chapters, but it takes a lot more. I liked the ending, as well as Harper and Nick’s chemistry, but by the end of it, it just took too long to get there.

Many compare Departure to the TV show Lost, but since I haven’t watched the show, I have no comments on that. I haven’t read anything else written by A.G. Riddle, but I have heard of The Atlantis Gene trilogy. Will I read anything else by this author? Probably not. While I adore some hard sci-fi from time to time, Riddle’s delivery of it was not something I warmed up to completely. If this book had a sequel, would I read it? Yes. I was invested in the characters, especially Sabrina and Harper, and would have liked to see more of them. Incidentally, 20th Century Fox has acquired the rights to the film adaption of the novel, so that’s something to look forward to. I would recommend this book to those looking for a quick and easy read, with promise of a lot of science fiction talk, a compelling storyline, and romance that doesn’t overshadow the plot.

A copy of this audiobook was provided by Audible for review.

Book Review: “Johnny and the Dead” by Terry Pratchett