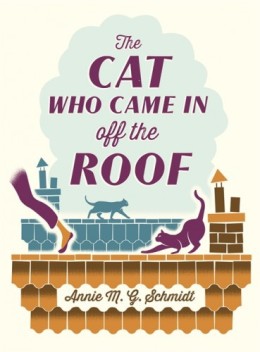 Annie M.G. Schmidt’s The Cat Who Came In Off the Roof was originally published in 1970, but its publishers are smart to reissue the title now – the character at the story’s core, Mr. Tibble, would fit in quite well with today’s cat video-obsessed culture. As Mr. Tibble’s boss points out at the beginning of the middle-grade novel, “Apparently you only ever associate with cats.” Been there, Mr. Tibble. Been there.

This devotion to his feline friends is causing Mr. Tibble some trouble. As a reporter in his small town, Tibble is supposed to write about local news and happenings, but he finds that he’s much more interested in reporting on the exploits of the neighborhood cats – talking to people is too frightening. But if Tibble wants to keep his job, he’ll have to figure something out. Enter Miss Minou, a mysterious young woman who appears in Tibble’s apartment one evening, acting suspiciously cat-like. With her help, he starts to uncover some suspicious goings-on around town. In the end, Tibble and Minou will have to team up with cats from all over town to uncover the truth.

If that synopsis sounds rather fanciful to you, well, you’re right – in a lot of ways, The Cat Who Came in Off the Roof is a little odd, but it’s all in service of the book’s charm. Aimed at readers between 8 and 12, the book is sure to delight even much older readers who are fond of both cats and whimsy. It’s perfectly silly in the most fun way, and if you let yourself go with its eccentricity, I guarantee you’ll find yourself enjoying the ride. Cat lovers of all ages will be amused by Schmidt’s spot-on depictions of bizarre cat behaviors. If you’re looking for pure fun, you’ve found it here.