This is the third and shortest book of five in The Dark Is Rising sequence. It brings the Drew children and their Great Uncle Merry from the first book (Over Sea, Under Stone) together with Will Stanton from the second book (The Dark Is Rising), with an encore of their quest for the Cornish Grail in the fishing village of Trewissick.

Almost a year has passed since Simon, Jane, and Barney discovered the grail, but as their Easter holidays begin, the grail is stolen from its museum showcase. Gummery (a.k.a. Merriman Lyon) gathers them together with Will and fellow Old One, Captain Toms (who owns the Grey House of the first book), in an attempt to retrieve the Grail and/or the lost manuscript that unlocks the secret of the Grail’s inscription, before both parts of this Thing of Power fall into the hands of the Dark.

This time the Dark is represented by a dark, long-haired, gypsy artist who exercises ghastly powers over the Drew boys. Also involved is a thing of Wild Magic called the Greenwitch — an effigy woven of hawthorn branches, weighted with stones, and thrown into the sea every year for good luck. A girl’s wish, a boy’s sketch, and the fears and shame of generations of villagers come to a hair-raising head the night the spirit of the Greenwitch rises from the sea.

The concept of “Wild Magic,” which is almost impersonal and neither of the Light nor of the Dark, deepens the texture of this series of magical adventures. And the fact that the Drew children and Will Stanton don’t immediately hit it off, also shows the author taking us to unexpected places. Again the story is essentially a showdown between classic Good and Evil, but with the reservation (for concerned Christian parents) that a form of “nature magic” is involved.

It’s a moving and exciting story, and interesting new facets of the familiar characters continue to be revealed. Ultimately, another prophecy — if that’s what it is — comes to light, pointing perhaps to a return of King Arthur and a final battle between the Dark and the Light. As such, the series continues with The Grey King. 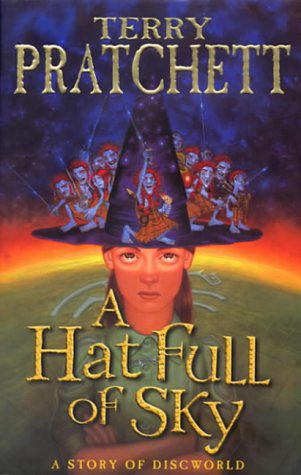 Book Review: A Hat Full of Sky by Terry Pratchett