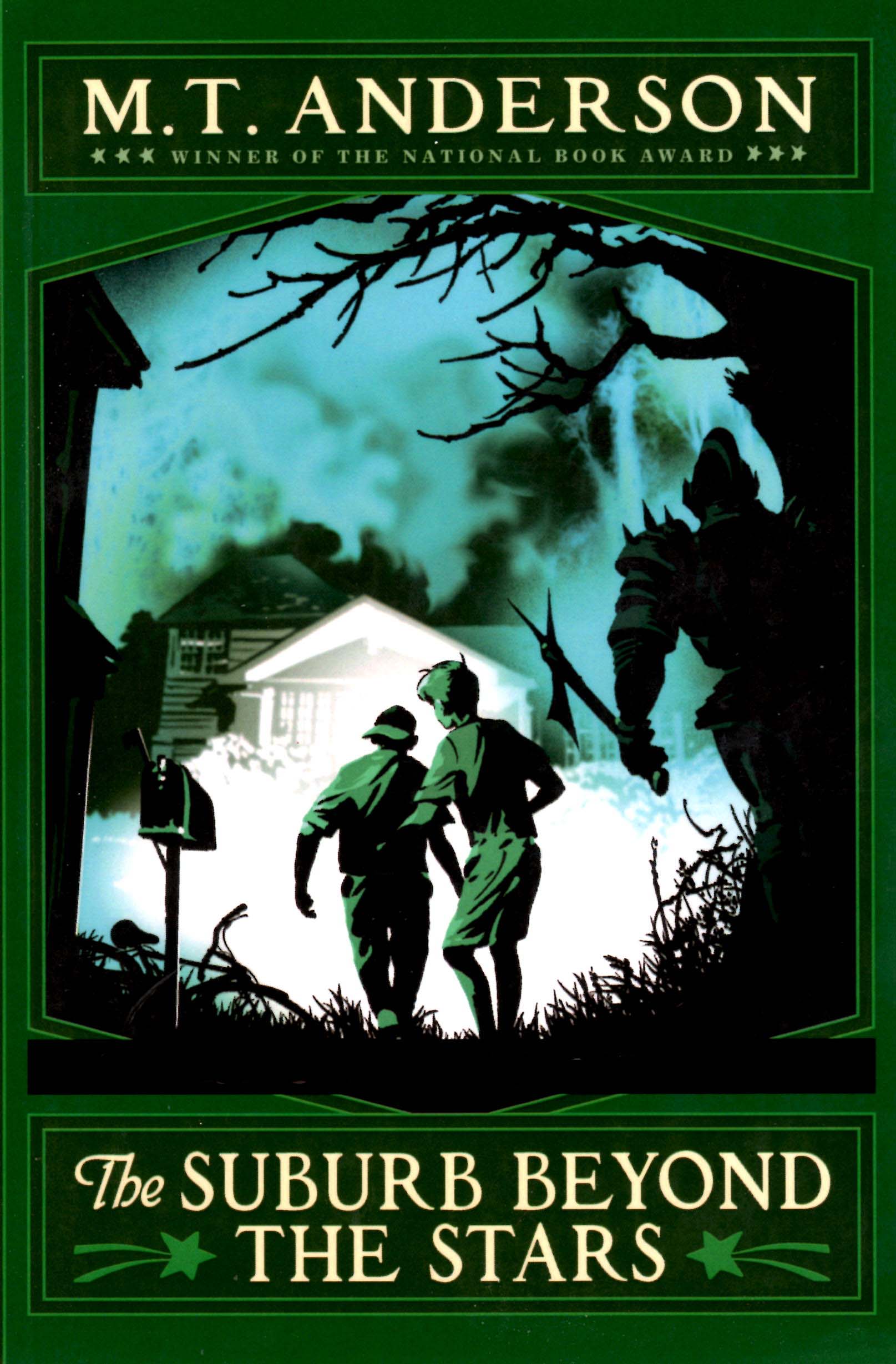 The Suburb Beyond the Stars
by M.T. Anderson

Several years ago, during a visit to New York City’s Books of Wonder, I picked up a copy of The Game of Sunken Places, by this author I had never heard of, and thought it was great. And though I’ve read a number of his other books, it was only quite recently that I found out that the above title is only the first book in the Norumbegan Quartet. This second book in the series did not prove very easy to come by. Barnes and Noble will let you order it, but won’t carry it on their shelves. I poked around the online catalog of my city’s public library system and found exactly one copy of it, residing in the branch just down the street from where I live, its last-known status “on the shelf.” So I put in a request for it, and nothing happened. I went to the branch in person and searched the shelves. Though I found a copy of the third book in the series (The Empire of Gut and Bone), I could not find this book. I alerted the library staff, and they did as thorough a search for it as is consistent with Public Library staff culture, but it never turned up. Recalling my brief experience as a library circulation tech, I applied the principle: “If it isn’t where it’s supposed to be, it’s lost forever.” So, thanks to me, the City of Saint Louis now lists this book as M.I.A. And thanks to this book, I now have a card for the Municipal Library Consortium and the power to request books from any of three library systems in the city and county of St. Louis. And, incidentally, I checked out this book (the Municipal Library’s copy, that is). I read it in one day. And now I can’t wait to read Book 3.

It’s been a few years since my trip to New York, and so also since I read The Game of Sunken Places. If you haven’t read that book, do so before reading any further. Even if you have, like me, you may need a refresher. In the first book of the series, best friends Gregory and Brian got caught up in a weird sort of game with monsters and magical creatures and spooky, gothic-novel atmospherics, amid the woods of the present-day Vermont mountains. Eventually they realized that they were actually playing against each other, as representatives of two magical races: the Norumbegans, whose elven empire had long coexisted with mankind, but who now lived in another dimension for the sake of peace; and the Thusser, beings of an unimaginably alien nature, who fought to control and colonize our world. The game, to be played once every generation by two young humans representing the parties in the conflict, is meant to settle which of the two races will finally win the right to live on Earth.

Brian, representing the Norumbegans, won the latest round. He has already begun to design the next round of the game, which he envisions as a hardboiled detective story combined with supernatural beings. But then he finds himself being followed by a menacing, red-faced figure—attacked and almost killed by a monster in Boston’s underground railway—nearly stabbed by an automaton that was supposed to serve as part of his game design. Brian and Gregory hasten to Vermont to find out why they have lost touch with Gregory’s cousin Prudence, who knows all about the game, and the dwarf engineer Wee Sniggleping, who has been building Brian’s designs. But where the forested mountain used to be, they find a rapidly growing residential subdivision. The suburb that nightmares are made of.

When you visit Rumbling Elk Haven, you will be chilled by the horror that lurks beneath the manicured lawns and behind the cul-de-sac house-fronts. It is a suburb where confused adults pull out of their driveway every morning and drive out to a vacant field, where they lie in the mud and hallucinate about being at work all day; where children ride their tricycles in endless circles, even while crying from exhaustion; where time speeds up and slows down in a confusing manner; where newspaper articles, brochures, and websites change continually while you read them; where an unknown force is tampering with people’s ability to remember a time before the neighborhood existed; and where, at the center of development, there lies a whirlpool of space-time leading to a terrible alien world. A world that is poised to invade ours, if it is not already too late to prevent it. And there’s no one left to prevent it but stocky, brainy Brian, his goofy friend Gregory, and a clockwork troll in medieval armor. Which is to say, it’s all on Brian.

You simply have to read this book. Otherwise, without giving up atrocious spoilers, I just don’t know how to convey to you just how frightening, weird, and disturbing are the menaces that menace Brian, his friends, and the whole human race in this book. Or how movingly the bond between these friends overcomes the serious differences between them. Or how much fun it can be to try to visualize something so indescribable that it can only be suggested, when you’re in the hands of an author who is as good at suggesting indescribable things as M.T. Anderson. To give you even a faint idea would take so many words of description that, as quickly as this book can be read, you would be just as far ahead to request it from your local library system, or via Inter-Library Loan, or to order it online and read it for yourself. That’s what I plan to do with the remaining two books in the quartet. Let’s see if we can’t, together, move this book and its companions from the “never checked out” to the “always on request” category in our libraries’ statistical metrics. They deserve it, and you’ll enjoy it.

M.T. Anderson is also the author of the Pals in Peril adventures (five books at this writing), the two Octavian Nothing novels, and such tempting stand-alone titles as Burger Wuss, Thirsty, and Feed. Book 4 of the Norumbegan Quartet, by the way, is The Chamber in the Sky.