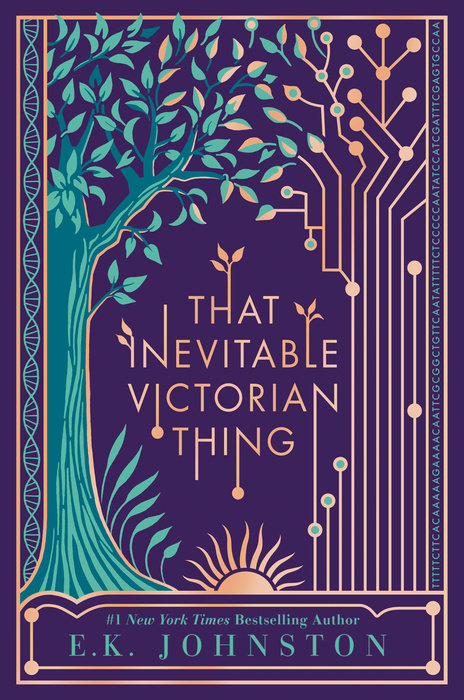 In the world of That Inevitable Victorian Thing, Queen Victoria was an empowered forward-thinker who made her daughter heir instead of her son and forged marriage alliances with important families across all of England’s colonized territories rather than just between Europe’s royal families. Two hundred years later, the result is that the British Empire never fell – though in author E.K. Johnston’s world, it’s far more multicultural than it was in real life – and corsets are still a required part of formal wear (except now they’re fashionable bio-tech accessories). Basically, it’s still Victorian society, but in a future with supercomputers and gene decoders.

The novel interweaves the stories of three young people who have just debuted into society – Helena, the daughter of a prominent doctor hoping to be engaged to her childhood sweetheart; August, said childhood sweetheart and heir to a powerful shipping firm; and Margaret, otherwise known as Victoria-Margaret, the heir to the British Throne, who’s gone undercover hoping to experience the “real” Empire before taking on her royal duties. And everything takes place in Canada! (In Johnston’s world, America never really managed to rise above petty infighting and make something of itself.)

That Inevitable Victorian Thing tackles a really intriguing, really fraught idea. For all that readers like I love Victorian-era courtship novels, the British Empire was an enormously destructive colonial power, and many of the countries that it ruled are still dealing with the fallout of their intervention today. Gender inequality and strict distinctions between social classes are just a couple of the things that I for one definitely don’t miss about Victorian culture. It’s to Johnston’s credit that she doesn’t embrace corsets and debuts without at least considering these issues, even if I feel that the book sometimes misses the mark a little bit. The novel requires certain aspects of Victorian culture in order for Johnston’s conceit to work, and Johnston simultaneously wants to push against many Victorian norms. It means the book is always a little bit at war with itself, but that is way better than if the author had leaned in entirely to historical precedent.

I enjoyed the book, even if one of the major twists did feel like it was lifted from an old House episode, and I really liked its ending, which is of a kind long overdue for mainstream YA literature. If the complex mechanics of this novel are sometimes too much on display, it has the virtue of being almost completely innovative. Sometimes it felt a little bit more like a thought experiment than a full novel, but it’s a fun thought experiment, and one I think will make a lot of people happy to read.