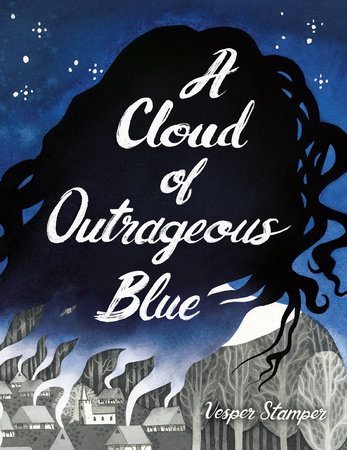 I was initially reticent to read A Cloud of Outrageous Blue, by Vesper Stamper, because no one thinks, “Let’s read a story about a plague during a pandemic.” But I am very glad I ignored those inner misgivings because A Cloud of Outrageous Blue immerses you in the life of a young woman in the 14th century, taking you on an emotional roller-coaster while making you forget about the world outside of its pages.

It did take me a couple of chapters to understand where the story takes place since I am unfamiliar with the small towns and villages within Yorkshire, England. But you can avoid that by knowing there is a map in the back of the book (which my e-reader did not show me was there until I had finished the book). There is also a glossary that defines many of the 14th-century and religious terms used throughout the book.

Once I figured out the setting, I was quickly absorbed in the story centered around the life of Edyth le Sherman. Her story starts out with what seems to be a 14th-century version of a coming-of-age story: A woman is forced to move from her village to a Priory in a big city and is trying to figure out her new life and purpose. But as each chapter unfolds, the story swiftly becomes a riveting tale of love, daring deeds, and survival.

First, the novel gains a surprising love story as someone from her past comes back into her life. Then, a mystery unfolds as Edyth and her friends work to uncover the actions and motivations of the story’s antagonists. The end of the book is akin to a high-stakes chase.

The story reaches its climax as Edyth works in the scriptorium,  creating illustrated manuscripts. This work is interrupted as the plague sweeps through the area, and the Priory is left in control of a nun who undertakes extreme measures to try and keep those in the Priory safe. The ending was not one that I expected, but I still felt satisfied and that the story had come full circle.

What makes A Cloud of Outrageous Blue stand out from the typical story in which friendship and love confront greed and power is the way Stamper invokes the senses. Edyth has what we now call synesthesia, which is when one sensation invokes another. When Edyth sees colors, she experiences certain sounds, smells, and sometimes visual cues. When Edyth interacts with color, so does the reader, providing depictions of the characters, setting, and experiences that immerse you in the 14th century and the story itself.

Elevating the reader’s visual cues are Stamper’s awe-inspiring illustrations. More than one illustration took my breath away with a masterful use of only a few colors to create mesmerizing images that grow more and more intricate as the story progresses.

It takes a special kind of story to get me to stay up until 2:00 in the morning to see it through to the end, but this was one of those stories. Set aside the apprehensions about reading a book about the plague while we live through a pandemic because Stamper’s novel so fully immerses you in Edyth’s life and times that a story set during the plague makes you forget about the pandemic happening in the world today.

A copy of this book was provided by the publisher, Alfred A. Knopf, for review.